When a Child is Hurt at School: Is it Just an Accident or is Someone Liable?

For better or for worse, injuries are a part of childhood and the process by which children learn to explore the world around them. While minor cuts, bumps and bruises are accepted as part of this process, the law can and does require those who supervise children to ensure the children enjoy a relatively safe play environment. Where this responsibility lies and the outer reaches of it are explored in the recent decision of Deo v Vancouver School District No. 39, 2018 BCSC 133 (CanLII).

In Deo the plaintiff was a grade two student who suffered serious eye injuries after a tree branch struck him during a lunch break. The plaintiff alleged the schoolboard was liable for his injuries under the law of negligence and the Occupiers Liability Act, R.S.B.C. 1996, c. 337 because the school board failed to properly maintain the school grounds, failed to warn students of the hazards on the grounds, failed to properly supervise the activities on the grounds and failed to call an ambulance after the injury occurred.

On the day of the incident, three of the plaintiff’s classmates were gathering leaves under a maple tree located on the school grounds. In the minutes before lunchbreak was over, the classmates asked the Plaintiff, being the tallest person in class, to help them reach a branch of the tree to gather more leaves. While exactly what happened is unclear, at some point a branch of the tree was held down and released. When the branch was released it struck the plaintiff in the eye and caused injuries.

The plaintiff waited with his grandmother for his father to arrive at the school, after which they all travelled to a doctor’s office. The doctor immediately sent them all to a children’s hospital upon inspecting the plaintiff’s eye. It was about two hours in total from the time the plaintiff’s father was contacted to the plaintiff arriving at the hospital. Upon arriving, the injury was determined to be serious, requiring hospitalization and surgery.

In reviewing applicable law and legislation, the court found that the standard of care applying to the school was one that considers what a careful and prudent parent would consider reasonable efforts to ensure safety in all the circumstances. The reasonable standard is not one of perfection and schools are not expected to protect children from any possible risk of harm.

The court rejected the notion that the branch in question had a tempting property making it potentially and obviously dangerous, finding instead that any liability that might exist in regard to the tree would result from the school not making efforts to check in on and regulate how children might play or interact with the tree. In other words, suitable supervision was enough to discharge the school’s duties in respect of hazards posed by the tree generally.

The court found that the school did not implement clear rules about interacting with trees, but did find that there was nothing negligent about an approach where playground monitors managed relatively minimal risks through supervision. The court found it to be too much to expect a school to make an ever expanding list of rules that might cover all unsafe interactions with non-hazardous items; it was not realistic to imagine that staff could give instructions on all conceivable misuse of non-hazardous items or that students would remember such instructions if given.

The court went further and found that a lack of set playground rules was not negligent nor indicative of a failure to implement a proper supervision plan; it was sufficient to teach children generally about safe play and enforce that through a properly implemented supervision. The school had assigned playground supervisors who were expected to scan and monitor students and to use their common sense in determining when to intervene. Special attention was paid to younger students. Nothing about the circumstances suggested the plaintiff’s injuries were the result of an accident waiting to happen.

From her training and the circumstances before her, the first aid attendant ought to have assessed the injuries as one a potential category two eye injury, being a more serious injury requiring 911 to be called for further medical attention. The school board’s first aid policy also provided that, in the case of any doubt about whether such services are required or not, medical services should be called. Even in circumstances where a student refused treatment, the school board’s policy provided that 911 should be called if a student’s health might be in imminent danger.

Having at least ascertained that the plaintiff was hit in the eye by a tree branch and having not been able to better assess the injury in question, the first aid attendant ought to have erred on the side of caution. She was trained beyond an ordinary parent and, as such, the prudent and careful parent analysis had to consider this training. The court found that it was negligent not to have called 911, even if ultimately – as the circumstances tended to suggest – the plaintiff and his grandmother would have refused treatment.

Having rejected all the other grounds of liability and finding that the injury itself was not caused by any negligence on the part of the school district, the question that was left for a later court date was the degree to which, if any, the negligent act of failing the call an ambulance which delayed treatment contributed to or exacerbated the injuries suffered by the plaintiff.

Deo is a useful case in understanding that the courts still consider accidents to be accidents and do not impose an unrealistic and burdensome standard on schools or any other institution to protect others from harm. It is equally illustrative that it remains good practice to implement and ensure adherence to procedures that help guard against foreseeable hazards, provide a safe environment and ensure that, when injuries do occur, there is a practice in play that will see victims have access to proper and timely medical attention. While the school board appeared to have proper policies in place, it was the lack of adherence to those policies that left the school vulnerable to potential damages.

Jeremy Burgess is a litigation associate at Pushor Mitchell with broad experience in litigation. If you have any questions about a legal dispute, we’d be happy to assist you. Feel free to contact Jeremy in a confidential manner toll free at 1-800-558-1155 or at burgess@pushormitchell.com. You may also contact our litigation group.

The foregoing is for informational purposes only and is not legal advice, nor should be construed as such.

Jeremy is a corporate/commercial litigator with experience in pursuing and defending claims in the Provincial, Supreme and Appeals [...] 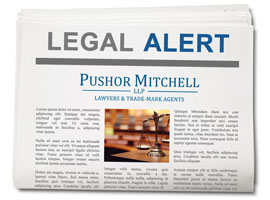